Things to see in Heraklion

Lato Boutique Hotel is the perfect starting point to explore Crete and its fascinating capital.

The Archaeological Museum of Heraklion is one of the most important and significant museums in Greece. The museum was built between 1937-1940, and boasts 20 rooms with exhibits originating exclusively from Crete. The collections come mostly from central and eastern Crete, and cover a span of 5.500 years. The exhibits are presented following the chronological evolution of the Minoan civilization.

The museum was founded in 1953 by the Society of Cretan Historical Studies. It is housed in a three storey neoclassical building, owned by the Kalokairinos family, and represents an important element of Cretan history and tradition. It comprises 12 rooms, showing the evolution of the Cretan civilization, from the Christian period until the XX century. Its collections include pictures, historical heirlooms, books, maps, Cretan costumes and many other exhibits depicting the Crete of the past.

In the Natural History Museum of Crete, visitors become familiar with the flora and fauna of Crete and mainland Greece. A key focus of the museum is to enable visitors to understand the relation between the old civilizations and the natural environment; to learn about the impressive past, and the future of Crete and the Mediterranean, through fossils, rocks and minerals.

The Museum of Visual Arts of Heraklion (METH) was established in 2000 by K. Schizakis and is a meeting place between artists and their audiences. It is a place of intellectual development, education and entertainment. The museum hosts important art and culture events.

'The Venice of the East', as it was described during the Venetian rule, and the Koules is the trademark of the medieval city of Heraklion. The Koules Fortress was built in 1523-1540 offering a spectacular view to the Cretan Sea and is the vigilant sentry that protects the city of Heraklion.

The tomb of the most beloved writer of Crete is located on the southern part of the Venetian Walls, on the highest point of the Venetian fortification at the Martinego cavalier. Its wooden cross bears his famous quote: I hope for nothing. I fear nothing. I am free. Offering a view to the entire city of Heraklion, this landmark makes clear that no homage will ever be enough for this great man.

Palace of King Minos at Knossos

Knossos is the most important and majestic creation of the Minoan Civilization, a sacred cultural heritage of Greece, and a world renowned monument. Located 5 km southeast of Heraklion, the Minoan Palace of Knossos, expanding over a surface of 22.000 m2, is visited by thousands of tourists and locals every year.

Located 63 km south-west of Heraklion, the ruins of Phaistos Palace are the second most significant palace complex of Minoan Crete, and are considered a unique cradle of cultural wealth. The old and the new palaces, the royal living accommodations, the storage areas, the workshops, and other facilities, are all important discoveries of the Phaistos archaeological site. The most important finding of the site, displayed at the Archaeological Museum of Heraklion, is the famous Phaistos Disc, one of the most famous mysteries of the known world.

With a history of thousands of years, Gortyn is one of the most important archaeological sites in Greece. This was the first the Roman capital of Creta et Cyrenaica. It is located 45 minutes from Heraklion. At the heart of the site you will see the Praetorium, the seat of the Roman Governor of Crete. In the same area you will see many other monuments of great historic and cultural value: the plates with the laws of Gortyn, the Roman theater and baths, the Temple of Apollo, the surviving ancient coins, and much more. Another important landmark in Gortyn is the Basilica of Saint Titus, dating from the 6th century AD, one of the first Christian temples on Crete.

One of the most important palace centers of the Minoan period is located in Archanes. Excavations began here in 1964 by J. Sakellarakis. The Tourkoyeitonia is open to the public. The settlement lays 15 km south of Heraklion, towards Central Crete.

The large Cretaquarium, 15 km east of Heraklion (located at the former American Base in Gournes) offers visitors a comprehensive perspective of the Mediterranean Sea world. Visitors come 'face to face' with hundreds of species and thousands of sea organisms. 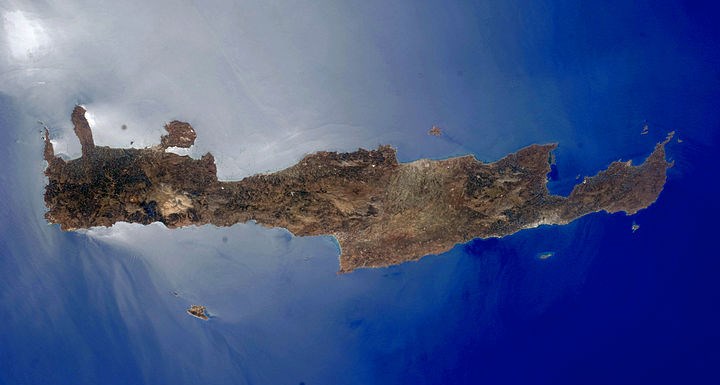